HARLEM, Manhattan (WABC) — The New York City community mourned the loss of a rookie police officer and another officer who is in critical condition after they were ambushed and shot while responding to a domestic violence call in Harlem Friday night, police said.

Mayor Eric Adams and community leaders gathered outside the 32nd precinct in Harlem for a candlelight vigil for the officers and unleashed an emotional plea to end the gun violence plaguing the city.

“We are going to unite around this issue and we know — some would say 95% of the city is good I say 99% of the city is good,” Adams said. “Let’s weed out that 1%. This is a fight — violence against New Yorkers, that’s the battle we’re in right now. We’re in a battle with a small number of people that believe they will hold our city hostage with violence. That will not happen.”

New York City Mayor Eric Adams makes an emotional address at the prayer vigil for the NYPD officers who were shot in Harlem Friday night.

The two NYPD officers who were shot were in the domestic incident Friday were identified overnight.

The NYPD said 22-year-old Jason Rivera died while 27-year-old Wilbert Mora remains in critical condition at Harlem Hospital after being shot in the back of the head.

On Friday, the officers were responding to a verbal domestic violence call in Harlem of a mother and son fighting. No weapons were mentioned.

The mother called the police for help and met them in front of the apartment on 135th Street at around 6:30 p.m.

When they went to a rear room to talk to the man, shots suddenly rang out, striking them both.

Rivera was the first officer in the hallway and was struck first. He fell onto his back. Mora tried to duck into the kitchen during the shooting.

The 47-year-old suspect, believed to be the son, was then shot by another officer, a rookie, who stayed with the mother in the front of the apartment. The officer struck the suspect in the neck and shoulder.

The suspect was later identified as Lashawn McNeil and was said to be in critical condition.

The officers were taken to Harlem Hospital in police cruisers.

Rivera, who was described by the NYPD as a son, husband, and friend, died.

“I am struggling to find the words to express what we are enduring, we’re mourning and we’re angry,” said NYPD Police Commissioner Keechant Sewell. “The pain their families are experiencing is not something anyone can put into words. The three officers who arrived at that scene were doing their jobs.”

WATCH | Commissioner Sewell: ‘Our department is hurting, our city is hurting’

Rivera was a rookie and joined the department in 2020 while Mora joined in 2018.

Officers had previously responded to the apartment for a domestic violence call in August.

McNeil has one prior arrest in New York City for narcotics in 2003 and four arrests outside of NYC, including unlawful possession of a weapon and assaulting a police officer.

He is believed to have had behavioral problems and posted anti-government and anti-police material on social media.

McNeil was staying with his mother to help her take care of her other son who possibly has a learning disability.

When McNeil came up from Maryland in November, his mother – knowing of his history with guns – ordered him not to bring guns into the house. She later told police she didn’t know he had the weapon.

CeFaan Kim has more from outside Harlem Hospital.

Police said the weapon used to shoot the officers, a Glock 45, was stolen from Baltimore in 2017.

A licensed security guard said it was taken by her 13-year-old son, who sold it for money. He was later arrested for the theft, but the gun was never recovered.

Saturday morning, Adams had all flags lowered to half staff out of respect for Rivera.

Adams later visited the 32nd precinct, where Rivera was stationed, and where memorial bunting was hung outside. 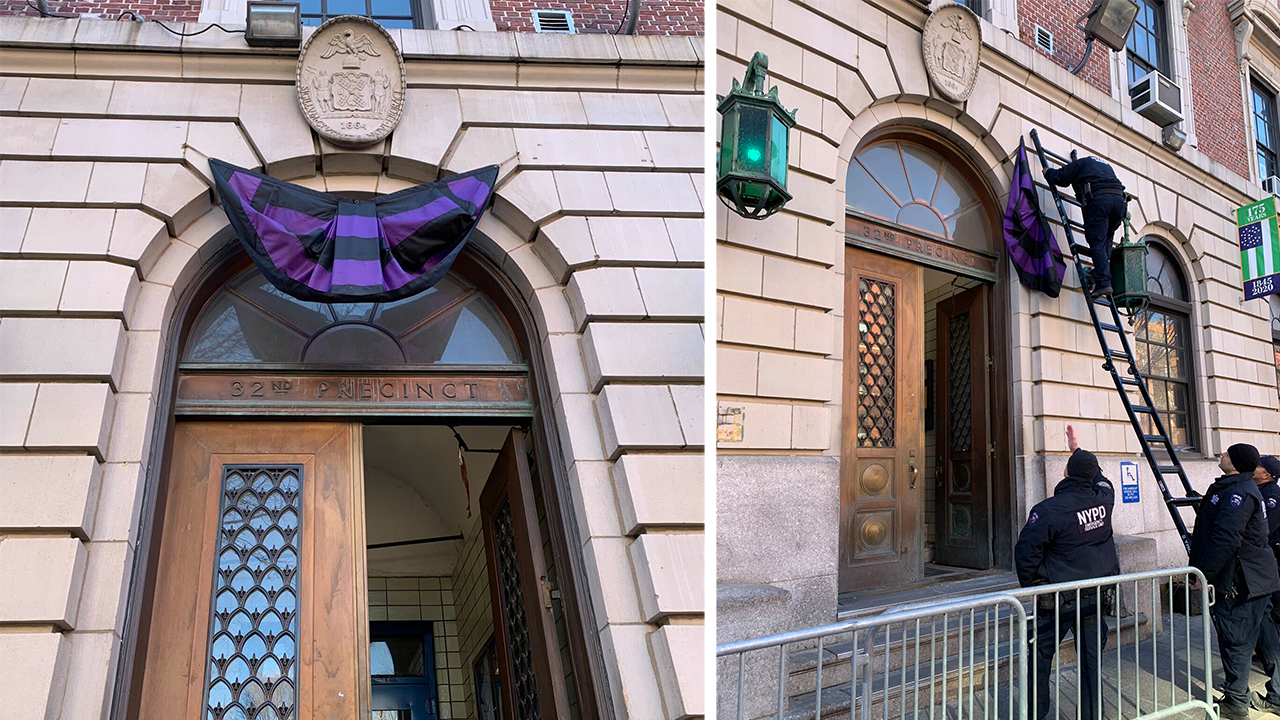 During an address in Buffalo Saturday, New York Gov. Kathy Hochul echoed a call from Adams for Washington to act on gun violence.

President Joe Biden posted on Twitter that he and First Lady, Jill Biden, were ‘saddened’ to hear about the shooting.

During an emotional press briefing Friday night, Adams spoke directly to the officers of the NYPD as they mourn one of their own.

“I have to ask you, no matter how painful this moment is, please do not give up on the people in this city,” Adams said.

Mayor Eric Adams passionately spoke out at a police briefing after two officers were shot, one fatally, in Harlem.

Adams and PBA President Patrick Lynch made passionate pleas on the importance of getting guns off the streets.

“Stop babies from being shot, stop the violence, the guns coming in — help us take them off the belt so they’re never shot again,” Lynch said.

PBA President Pat Lynch was emotional during a press briefing after two officers were shot in Harlem and one was killed.

There have been a total of four police officers and three suspects shot within the last 72 hours.

One officer was shot in the Bronx and one in Staten Island. Both of those earlier shootings were non-life-threatening.

Friday’s shooting in Harlem marks the fifth police shooting since the start of 2022.