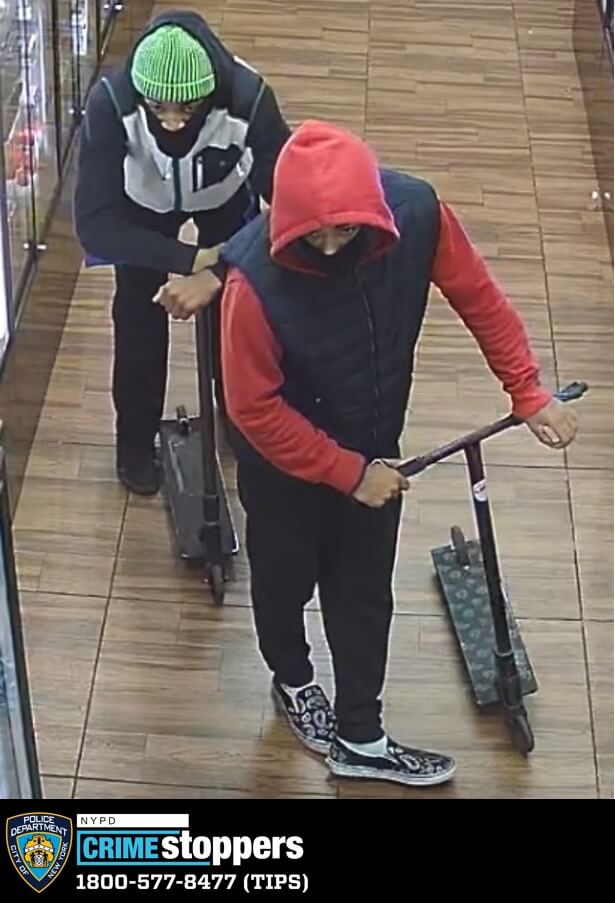 The NYPD is looking for a pair of crooks who robbed two senior women in Midtown this month.

Authorities say that at 10:30 p.m. on Jan. 2, an 85-year-old woman was walking westbound on West 34th Street toward 8th Avenue when she was approached by two unknown men on scooters. The suspects proceeded to take the victim’s purse, which contained a bank card, personal identification and personal documents, from her hand before fleeing the scene toward 8th Avenue.

The victim suffered a minor injury to her hand as a result and was taken by paramedics to Lenox Hill Healthplex in stable condition.

The victim suffered swelling to her left wrist as well as an injury to her left eye as a result of the attempted robbery. She was taken by paramedics to NYC Health + Hospitals/ Bellevue in stable condition.

The NYPD released surveillance photos of the suspects taken prior to the Jan. 2 incident. The first suspect is described as a man in his late teens with a medium complexion and a thin build. In both incidents, he was wearing a red hooded sweatshirt, a dark vest, black pants and black shoes with white designs.

The second suspect is also described as a man in his late teens with a medium complexion and a thin build. In both incidents, he was wearing a green winter hat, a white and black jacket, black jeans and black sneakers.

Anyone with information in regard to this pattern is asked to call the NYPD’s Crime Stoppers Hotline at 1-800-577-TIPS (8477) or for Spanish, 1-888-57-PISTA (74782). The public can also submit their tips by logging onto the Crime Stoppers website or on Twitter @NYPDTips. All calls are strictly confidential.